The table below provides a brief summary of SPAR’s application of the King IV™ principles, with references to where these are addressed in the integrated report. 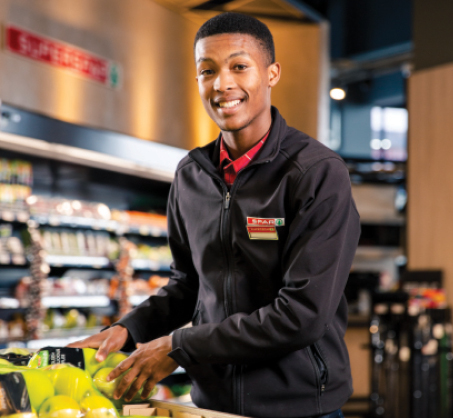 A South African challenge within a global context

SPAR International is now in 48 countries, with South Africa as the second biggest and second most influential country after Austria in the global group. In the past five years we received more than 20 “look and learn” visits from other SPAR countries’ retailers, or groups from countries such as China exploring the retail offering for their market. South Africa is seen as the best example of an emerging market with a well-established store and distribution network. We also send our own people on similar visits arranged by SPAR International, where they are exposed to cutting edge developments in retail and logistics. They return with new perspectives, which helps us avoid what we call “country blindness”.

We remain concerned about conditions in and prospects for South Africa. I am personally involved in the CEO forum where we play our part in supporting government to avoid further rating downgrades, and instigate growth. As SPAR we contribute in many ways and encourage retailers to do the same by getting involved on a municipal and provincial level. We had the SPAR International board meeting in Durban in October, spreading the message about our country’s potential.

We further contribute to South Africa through many social projects. The Millhouse Porridge initiative is one example of this: we know that seven million of our country’s children regularly go hungry. This affects their ability to thrive or even to survive. At SPAR we are committed to providing nutritious and affordable food, and we have the national logistics infrastructure and systems to tackle this kind of problem. Therefore, we started distributing fortified porridge through our distribution centres and stores to feeding schemes and orphanages around the country. We also provide educators with material and support to improve their awareness around the value of nutrition.

SPAR’s sustainability is linked to South Africa’s success as a country.

Read more about our social and environmental efforts and contribution in the operational reports.

SPAR did well in a tough South African environment. Turnover increased by a solid 8.0% and case volumes stand at 243.9 million in total – the highest number ever dispatched by our distribution centres. Our inland distribution consolidation centre in South Africa is complete. We see continued strong investment by retailers opening new stores and doing refurbishments. Leadership transitions, change has progressed smoothly.

Factors that ensured higher than expected growth and earnings included:

Some areas of the business disappointed, and required specific interventions:

Store at a glance

Expanding our reach into Poland

The SPAR Group’s entry into Poland has two aspects:

Poland became a member of SPAR International in 1995 and the first SPAR store opened in 1996. The ownership of the licence changed a few times, and was granted to The SPAR Group this year. Poland has 250 SPAR branded stores but no distribution centre – the model relies on a network of wholesalers.

PiP, on the other hand, has three logistics and distribution centres servicing its chain of 66 supermarket stores. The final agreement to acquire PiP was effective on 1 October after the Polish competition authorities agreed to the takeover in July. Over the next few months the PiP stores are to be rebranded as SPAR, and EUROSPAR

Both PiP and SPAR Poland have small market shares in a country with more than 38 million people and one of the fastest-growing economies in the European Union. The opportunity for us is to consolidate these two businesses and establish an efficient supply chain that can be scaled up in the short to medium term. There are currently an estimated 13 500 independent retailers operating in Poland.

We expect the combined business to break even in the next 18 months based on a rapid increase in market share. We have more than 200 people employed in the business, which will be overseen by Rob Philipson, the managing director of SPAR Switzerland. In Switzerland we deployed Gary Alberts as chief operating officer to support Rob in his expanding role.

Read more about the transaction process, costs and funding in the financial review.

Protecting the SPAR brand and reputation

The SPAR brand is our most valuable asset: it lives in people’s hearts and minds. The SPAR trading model puts our brand in the hands of independent retailers, who become the stewards of the brand when they operate stores under SPAR formats. This means that if one retailer harms the brand, all retailers are potentially affected, and The SPAR Group most of all.

The SPAR Guild acted decisively this year when one of the retailers owning stores brought the brand into disrepute, mainly due to labour practices and food safety issues. The guild terminated their membership and we offered to buy all stores and properties related to the family. This was a significant step as this retailer group is SPAR’s biggest customer.

The value of a strong talent succession pipeline was evident this year as we managed a smooth transition for several senior members of management. We were able to replace individuals with a wealth of experience with internal candidates who have all been groomed for leadership positions, and promoted transformation at the same time.

Three distribution centres have new managing directors. External expertise was only recruited for two positions: that of our chief information officer and our SPAR brand executive. These changes have been in development for more than a year, and in all cases, we provided certainty as early as possible. This assisted in proactively recruiting for the positions, and limited disruption to the business.

I want to thank all our executives for their amazing service to our business, especially Wayne Hook and Roelf Venter who have been great leaders for more than 35 years each in the group.

In Ireland, we are also preparing for leadership changes. According to the acquisition agreement with BWG Group in 2014, SPAR would acquire the remaining 20% shares under a pre-packaged pricing formula that depended on future profits. John Clohisey retires in December 2019, John O’Donnell in 2020 and Leo Crawford in 2022.

The ownership exit in Switzerland is scheduled for between December 2020 and February 2021.

Standing with our stakeholders

Our material relationships remain at the heart of our business. These include our employees, suppliers, consumers, retailers and communities.

When our stakeholders face challenges, we engage and support them where we can. This year, we took a strong stance against gender-based violence and added our voice on behalf of SPAR. We recognised the need to be courageous in living our SPAR values as they relate to this issue. We offered our sincere support for the victims of gender-based violence and to their respective loved ones and committed to be part of working towards a practical solution. We also urged all leaders in government, business and in civil society to join us to free our society from all gender-based violence.

We have seen a year of intense labour negotiations as we concluded three-year wage agreements at our KwaZulu-Natal, North Rand and South Rand distribution centres.

Our priorities for the next financial year

South Africa remains our home, our biggest market and most important focus area. We don’t expect the trading environment in South Africa to improve significantly in the medium term. We believe that SPAR’s independent retailers remain suitably positioned to address our country’ challenges, supported by an extensive distribution capability and market-leading brands.

We are fortunate to have a solid, decentralised management structure with a strong team of divisional managing directors. In the next year we plan to fully bed down the inland consolidation centre and continue the rollout of SAP. We continue driving all aspects of our fresh offering and customer service.

The focus in Ireland will remain on driving the business and managing the minority shareholder exit transparently.

In Switzerland, profitability remains a priority while driving topline growth and enhancing margins.

Poland will be a major focus area as we re-establish the SPAR brand, re-energise the delivery network for SPAR and PiP retailers and rebrand the PiP stores.

Sri Lanka now has three stores which we are planning to increase to eight next year.

We remain excited about the opportunities for SPAR wherever we are.